The Fed’s final event of the year lands in a time of year that often suffers from rushed booking, absences and the holiday season. This year is no different, as many feuds going into the show feel under/un-developed, scattered and cold.

With television ratings suffering their worst numbers in nearly twenty years, The December event has consistently been scheduled for mid-month, in order to take it easy on performers around Christmas. After all, the much-anticipated Road To WrestleMania is right around the corner at the Royal Rumble.

Fan apathy is at a high, and the product is floating in the water.

Let’s break down the build and booking (or lack thereof) for this year’s edition of TLC: Tables, Ladders & Chairs (and thankfully, no Stairs).

Ryback vs Rusev (with Lana)
Let’s give it another try

Remember around this same time last, when Ryback returned from injury? He was getting booked really strong through the winter. At the same time, Rusev was still riding the massive build created by his undefeated streak. They clashed in matches which resulted in non-finishes. It appeared they were building toward Ryback ending the streak of the Russian(Bulgarian) Brute.

Then, the night of the Royal Rumble, John Cena and Rusev bumped into each other backstage, and instantly they began to feud. Cena ended up getting the WrestleMania moment, pinning Rusev for the United States Championship.

Meanwhile, Ryback got a moment in the pre-show battle royal. He did end up getting a consolation prize: Daniel Bryan’s Intercontinental Championship. But after another injury, a staph infection, Ryback lost a lot of momentum this year.

Rusev too has lost some steam. Injury again, this time a torn bicep for him and broken wrist for her (Lana). Also, the 2015 attempt at a love triangle/quadrangle (which is a square) died a death that wasn’t quick enough.

Now re-united with his real-life (and we’re proud of it) fiance Lana, Rusev is getting into with Ryback again. This began last week when Rusev and Lana were celebrating their love with live PDAs, when the Silver-Back interrupted and challenged the brute to a fight.

During the match, Ryback accidentally hit Lana with stairs (how much you wanna bet they wanted to book this as a Stairs match originally?).

Rusev sits in a strange spot, nearly painted as sympathetic. He may be big, violent caveman, but he goes into protect mode at the drop of a hat. Ryback, meanwhile, looks like a careless lout.

This match should be good for both performers. They know each other well, they put on very physical matches, and they both have something to prove. 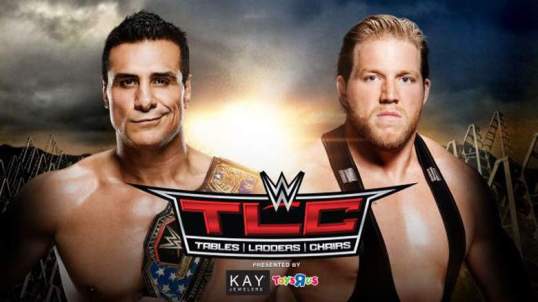 This feud has suffered from how unintentionally humorous it is to watch Zeb Coulter on a Rascal.

Swagger’s appeals to Coulter are so heart-felt, so touching, and Zeb’s selling is sincere as it gets. This could become an emotional reunion if executed well at TLC.

Del Rio has allowed his self-interested aggression to finally take over. Since returning to WWE, Del Rio has barely smiled. He appears to be on the verge of attack at all times, a real dangerous man bent on victory. Freeing himself of Coulter allows him to be as merciless as he wishes. 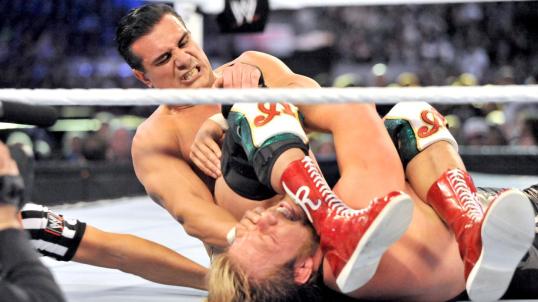 Swagger needs to get absolutely decimated by Del Rio during this Chairs match, beaten down again and again while Zeb Coulter looks on.

Regardless of whether Swagger wins back the United States Championship or not, the story of the match will be “Zeb and Jack back together again”. 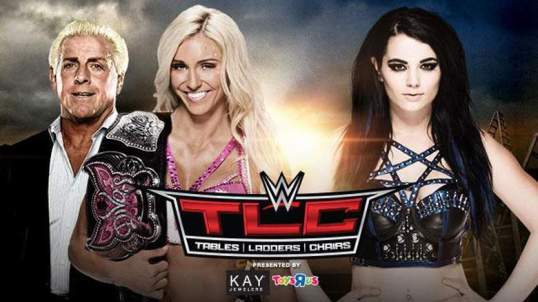 They still won’t give gimmick matches to women. Even though this feud has spanned three pay-per-views now, and it is the most physical, heated feud going right now (including the Wyatts vs Team ECW program!).

Charlotte and Paige have been having great matches, full of tangible professional & personal heat. This match promises to deliver. 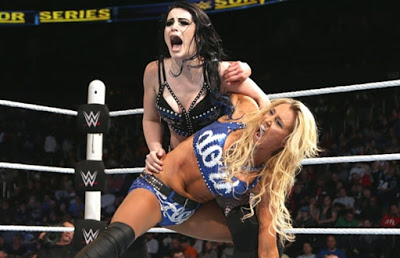 The big question will be if Becky Lynch will be involved. During the build for Charlotte vs Paige, Lynch has become intertwined, becoming the pivot-point for the champ’s heel turn.

If Flair promises to be in his daughter’s corner, it begs to have Becky Lynch drop the shocker of standing in Paige’s corner, cementing Charlotte’s alienation for being an untrustworthy heel.

(Because as we all know, Paige is so much more loyal.)

Flair has only begun to shine as a champion, and it would be a shame to end her reign before she has an opportunity to pursue a program with Lynch for the title, perhaps at Royal Rumble.

Prediction: Charlotte retains the Diva’s Championship after shmoz business on the outside causes match disruptions, maybe a ref bump.

The ECW reunion has gone over well enough, but it doesn’t have enough juice to threaten the A-storyline. Unfortunately, that means the Wyatts won’t either if they keep feuding with hardcore legends.

The Wyatts confronting the League of Nations was a nice bit of conflict on the go-home edition of Raw. One wonders if it might not be foreshadowing a Wyatt takeover of the new faction headed by the WWE World Heavyweight Champion.

Good move by the bookers making this an elimination match. More opportunities for multiple jaw-dropping table spots, which is what this match is all about.

The Wyatt Family will undoubtedly come out on top, or at least they should. Strowman deserves a strong showing in this contest, cementing him as a legitimate monster that could make waves at this year’s Royal Rumble.

Prediction: Wyatt Family wins, with either Bray Wyatt and Braun Strowman surviving OR Strowman being the lone survivor.

It may seem strange that two such legendary veterans of indie blood-baths and extreme street fights should face off at TLC without any of their favourite toys.

However, it makes great sense when you consider that both men are elite technical performers, and having them duke it out in a straight match is likely to make it a high-light of the night.

This match has suffered from a lack of build, with Ambrose dividing his attention between winning ANY belt in the Fed that he can and lending a hand to the man who beat him for the WWE World Heavyweight Championship, his friend Roman Reigns.

Dean Ambrose closes out the year much the same way he did last year: being the guy many of the loudest fans want to see getting the big push, but ends up with second banana scraps instead.

With the triple-threat tag team ladders matches of 2001 setting a standard that probably will never be surpassed, this contest comes as a daring undertaking.

Kofi Kingston has proved his uncanny ability and creativity in exploring the ladder match’s potential, and Kalisto is guaranteed to have some heart-stopping high-risk spots. 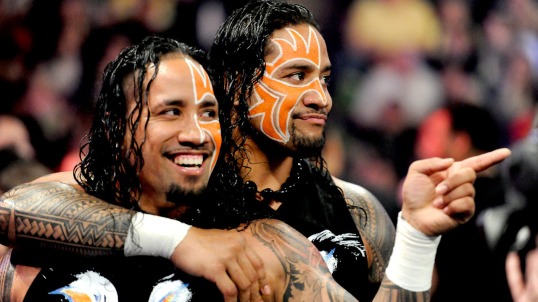 The Usos are flyers too, and Big E is probably the best base you could get. With Xavier up to his usual hijinx at ringside, this will be a fast-paced, rapid-fire match full of entertaining moments. 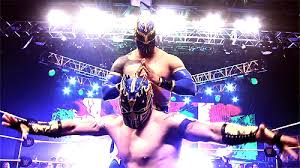 Although lacking much in the way of personal story-lines, the tag team division has devolved into purely physical contests. Xavier fills the void of mouth-piece sorely missing in today’s tag scene. The Usos and the Dragons could both do with representation.

Predictions: Spot-fest ends with the New Day retaining the belts with inspiring new displays of heel-dom.

Reigns continues to struggle while carrying the ball in the Fed’s A-storyline, and continues to earn the audience’s most tepid and divided of receptions.

In short, this rivalry lacks real heat. It’s a shame too, considering both have the potential to tear the house down. 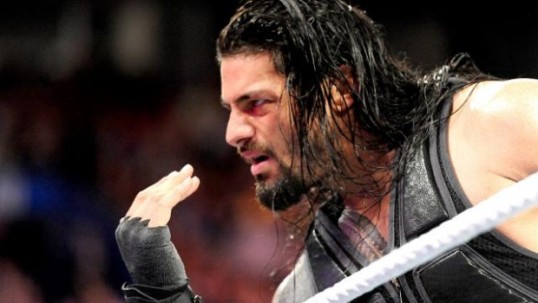 Reigns has surprised critics this past year with the delivery of some epic gimmick showdowns. Whether it be with the Big Show at Extreme Rules or Bray Wyatt at Hell in a Cell, the Shield powerhouse has come through with flying colours.

Sheamus, as well, has been one of WWE’s best workers and consistent performers over the years, and always seems to deliver on game day. Even though his current run as champion may not go down in history as his best, he may redeem himself with a balls-out slobber-knocker at TLC.

It’s anyone’s guess what will happen at the end of the night. Brock Lesnar, Sting, John Cena, Undertaker & Kane are all laying low, but could resurface at any time and cause controversy.

How big of a role will the League of Nations play in the match?

Will Dean Ambrose play a part and perhaps finally turn on his friend?